Historical competitor of the Renault Megane and some Volkswagen Golfworthy heiress of the famous 306, the new 308, presented at the end of summer 2021has been completely renewed.

This third version full of ambitions, more upscale than ever, adopts the best of the technology of the groupe Stellantis. Its welcoming interior gives pride of place to design, with an architectural layout and an omnipresence of screens.

However, the set retains the necessary practical aspects, with sufficient storage. Some will also regret the obligatory (and sometimes complicated) passage through the touch screen to control all the on-board functions, and the readability of the instrumentation which varies according to the height of the steering wheel, and therefore the driving position adopted.

At the rear, the space remains very acceptable for two adults, but the French remains much less habitable than a Golf.

Based on the EMP2 platform since taken over by theOpel Astra, the 308 is the first compact sedan from Sochaux to have plug-in hybrid engines. It also retains more classic gasoline or diesel blocks, and will soon appear in a 100% electric version.

Its road behavior deserves nothing but praise, even if the previous version showed even more dynamism.

The Sochaux appeared at the same time in hatchback and station wagon SW. The version with a hold extends over 4.63 meters, or 26 cm more than the sedan. 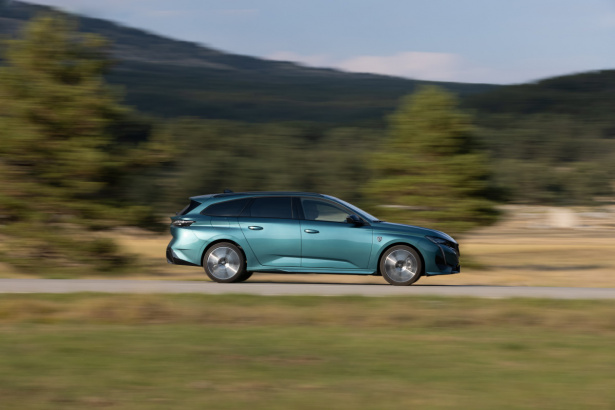 Our advice: to promote a possible resale and to take advantage of the strengths of the 308, the choice of the Allure finish seems to be a minimum. And for €800 more, the Allure Pack further improves day-to-day convenience and safety.

In terms of power, the choice is rather simple: with the exception of a PureTech 110 being only available in the basic Active Pack finish, the 308 only hasa 1.2 three-cylinder 130 hp engine.

But the long staging of its mechanical transmission sometimes requires downshifting to restart or overtake. According to Peugeot data, this 308 sprints from 0 to 100 km/h in 10.5 seconds and goes up to 198 km/h.

It does not offer the thrill either but gains in pleasure and availability, without increasing the average consumption, announced at 5.5 l/100 km according to the homologation cycle and observed at 6.6 during our tests, on different types of routes.

As with the PureTech 110, it is only criticized for slight vibrations at idle speed.

Our advice: The PureTech 110 is a good start but is only available in the basic Active Pack finish. We will therefore prefer the 130 hp, which also has the advantage of being offered with the automatic gearbox. 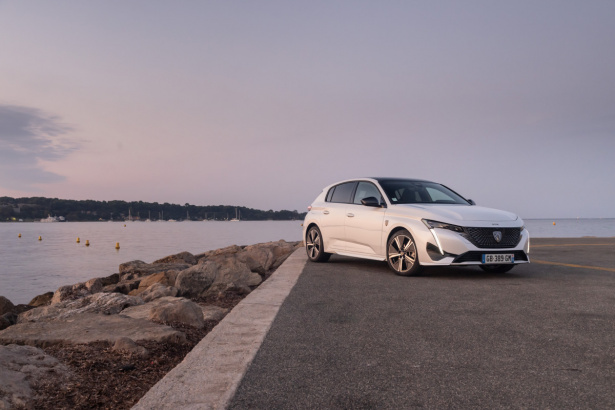 Well soundproofed and flexible, this 4-cylinder shines with its sobriety during long journeys at stabilized speed, where consumption fluctuates around 5.1 l/100 km.

Consumption changes little (about 0.3 l/100 km more) with the very recommendable automatic gearbox (+ €2,000), both intelligent and very discreet. In any case, the diesel-powered 308 ignores any penalties.

In addition to their ability to drive in 100% electric mode, the 308 PHEVs are distinguished by their weight, established at 1 600 kg minimum.

This detail is detrimental to the dynamism of the compact, which also suffers from unpleasant braking management. The transition from regenerative braking to friction braking causes recurring jerks and jolts, which affects the pleasure.

Two Hybrid e-EAT8 proposals exist, with only two-wheel drive, an identical total torque of 360 Nm but combined powers of 180 hp and 225 hp.

They revolve around a 4-cylinder petrol engine, respectively 150 and 180 hp, coupled to an 81 kW electric motor powered by a 12.4 kWh capacity Li-Ion battery pack. It takes seven hours to fully recharge the battery on a simple household outlet, and two hours via a 32A terminal with the optional on-board 7.4 kW charger.

The performances of the two versions, which are very close to each other (0 to 100 km/h in 7.5 and 7.6 seconds), like their electric range of 59/60 kilometres, raise questions about the interest of the “big” version.

With identical equipment, €1,900 separate the two versions. Also note that the 180 hp version is not offered in a high GT Pack finish.

Our advice: Unless you opt for the 308 GT Pack, which leaves no choice, there is no reason to select the Hybrid 225, which is more expensive, not more economical and barely more efficient. 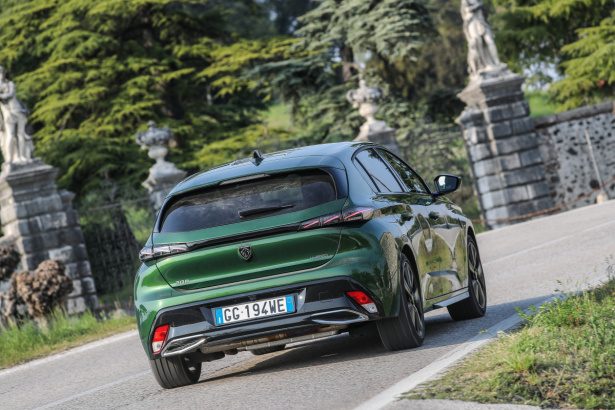 The heated acoustic windshield is priced at €200 and, for versions that do not benefit from it as standard, “hands-free” start-up access costs €400the 360° camera is displayed at €500 and the heated front seats, €200.

For the rechargeable hybrid versions, the 7.4 kW on-board charger (for faster charging on WallBox 32A) is offered at €400.

The Peugeot 308 in numbers

Peugeot 3008: should you still buy it? Our opinion