Among the dreams that every biker has, traveling around Corsica out of season is certainly one of the sweetest. We ticked the box thanks to the Corsica tourist office and Yamaha Motor France, starting discovering the GT20, this road which crosses the island from north to south (or vice versa) over 600 km.

After less than two hours of flight from Paris, we are welcomed in Ajaccio by the team of the agency and the local Yamaha dealer, Kit Moto, to hand over the keys to the gear and learn about the course. Time for a souvenir photo with the whole team and here we go direction Propriano on the handlebars of this funny three-wheeled beast called Niken.

Handling this machine based on MT-09, with specific suspension system at the front, is not so complicated. The first looped kilometers are a bit risky but you get used to it quickly, until you forget that you have two wheels at the front. But it turns out to be a good travel companiononly certain heavy braking in the descents of the pass will highlight its overweight at the front.

Between land, sea and gastronomy

The Japanese attracts all eyes, especially those of tourists sunbathing on the beaches along the Gulf of Ajaccio. The D55 then the DS155 meander along the coast, rather wild in this area, up to Serra di Ferro. In order to save time, we bypass Propriano and its port to climb up to Sartène, clinging to the slopes du Monte Rosso, at nearly 1,000 m altitude. The one that Prosper Mérimée described as “the most Corsican of Corsican towns” is a real postcard with its large door, its old church with its impressive bell tower and its massive stone houses which line the alleys.

Located on the other side of the mountain, in the Ortolo valley, the Saparale estate is a little lost paradise. The crossing of the vineyards surrounded by rocky bars is a moment out of time. Julie Farinelli welcomes us for a tour of the cellar, where the nectar patiently ages in barrels, barrels or jars. The grape varieties used here are typical of CorsicaSciaccarello for light reds and fruity rosés, and Vermentino for appellation white wines.

We could have stayed the evening discussing the Corsican wine tradition, but a feast and a good night’s sleep awaited us a little further up the mountain, in Levie. The night road allows us to appreciate the interest of having good lights like the perfect lighting of the Niken and having two front wheels is clearly reassuring. Antoine Rocca, who welcomes us at “A Pignata”, is at the origin of the transformation of the family sheepfold into a hotel-restaurant, which nevertheless retains its main activity, pig farming. It’s hard to resist a visit to the cellar where hams and sausages hang proudly.

After a little tasting in the rules, the man with the pronounced accent invites us to his table. And let the feast begin: baked lamb, cannelloni with brocciu, regional cheeses, chestnut cake… Fortunately, a little homemade myrtle will make it all go before a well-deserved good night. The next day, we will go down to the center of the village to meet Jean-François Tramoni, cutler of the Lotus, renowned in the region. 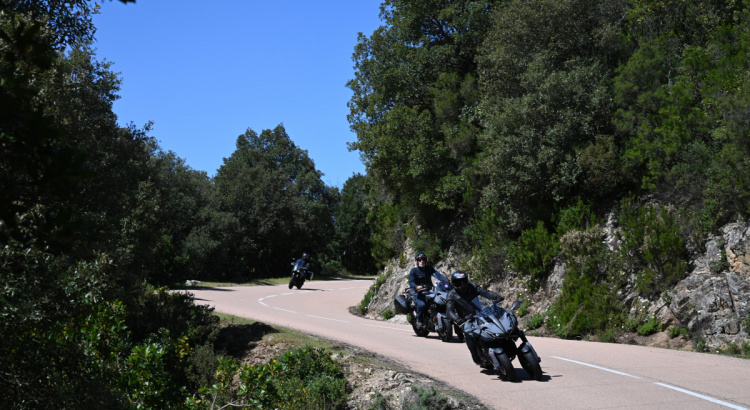 In the workshop of another age, Jean-François tells us about the link between the Corsicans and this tool. We are talking about a tool because each knife was developed according to a function, forged and assembled by hand. In Corsica, there are still a good forty artisan cutlers, that is to say the know-how and the constant demand. We take back the handlebars of our Japanese by the pass of Bacinu, with a panorama of impressive rocky bars where the giant pines flourish. You could imagine yourself in North America.

The descent to Figari allows you to regain a few degrees, a little too much. When we arrive at Jean-Baptiste de Peretti, the temperature is even summery. Charcuterie, figatellu, donuts with brocciu, cheeses, and finally desserts like the Fiadone, everything is there to satisfy our taste buds. Jean-François offers us a small tasting of wines that he produces locally, but our program is tight.

We must reach Bonifacio by the T40 and the west coast. The road to get there alternates marshes and pine forests, with false Camargue airs, but more rocky. The Niken offers its full potential here, the fluid curves make it possible to take the angle in complete safety, a delight. In the distance, we begin to see Bonifacio. Going back down to the port, which seems timeless, carved into the rock, we take the Tonnara road, where the boss of Marco’s awaits us.

Time for a detour to the Church of the Trinity, perched 200 m above sea level, an unmissable place of pilgrimage, we go to Marco’s for an introduction to bouillabaisse. Redfish, sea bream, John Dory… are mixed together in this traditional soup that we taste on the small port of Tonnara, with a superb sunset. The next day we go back north, via the GT20, in a totally different setting. 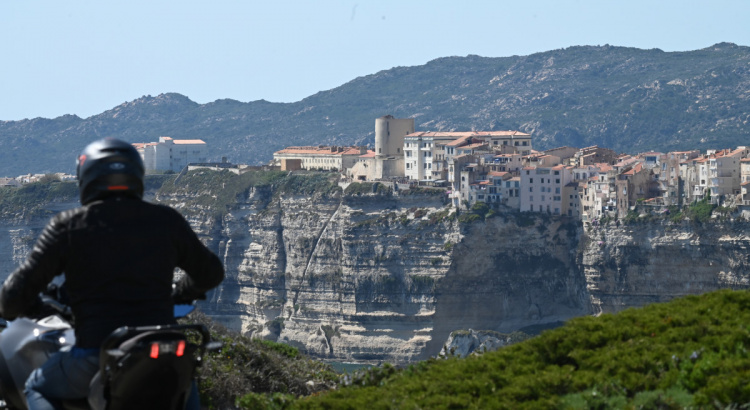 After leaving Bonifacio in the direction of the GT20, we decided to make yet another detour. At the end of a long dirt road, we discovered a wild beach, with the only backdrop being white sand and the translucent sea. But silence on the name of the place. Paradise is earned, and it is protected! The iodized lungs, the skin sated with vitamin D, head to the GT20.

After a hook by Porto-Vecchio, we therefore attack the mountain direction Zonza. And there, it is the good surprise. Faithful to the different sections that we were able to take during our journey, the GT20 winds here again between mountains and forests, between cliffs and breathtaking panoramas. The Niken is handy and its 115 hp engine is an excellent tool on winding roads. On the comfort side, although the handlebars are a little wide, the position remains correct. The traditional villages parade.

After passing the Ospedale, a little before the dam, we take a last break for lunch by the lake. The water level exceeds the average and offers a Canadian landscape to be mistaken. This stopover gives us the opportunity to debrief on this magnificent trip which, in barely three days, has given us a boost of morale for an entire year. A few hours later, we cross Zonza before crossing the pass at the foot of the Bavella needles and its wild nature to descend towards Solenzara then Corte where the journey ended. The GT20 served as a guideline, but it is necessary, to really appreciate the ride, to make detours according to desires and encounters.

MORE INFO ON THE SUBJECT:

If it was able to attract the eye throughout our journey and get us out of delicate situations where a motorcycle would have had a little more trouble, the Niken was above all able to stand out for its ease of handling. A little heavier in the front axle with its two twin wheels and its multi-steering axle technology, it nevertheless benefits from good maneuverability. The CP3 3-cylinder 847 cc 115 hp engine from the MT-09 is more than enough to move the 267 kg (with full tank). It has a host of electronic aids like traction control, slipper clutch, different riding modes and cruise control. The Niken took up the challenge of the Corsican roads with flying colors.