Carl-Magnus Norden never claimed to have had the first idea of ​​adapting electric propulsion to the city delivery truck. How could he? Established manufacturers – whether European or Asian – all offer at least one electric van or carrier for supplying shops and delivering food in the city center. These trucks, on the other hand, are all shaped according to the ancestral pattern which throws the driver against the door, too far from the sidewalk and too high to correctly perceive pedestrians and cyclists.

Blind spots, a fear of the truck driver and the cyclist in the city

This is where Carl-Magnus Norden’s approach to the truck stands out. This Swedish entrepreneur (who went through finance and real estate before coming to the automobile) was actually the first to want to take advantage of the compactness of the electric motor to bring it against the rear axle and lower the cabin floor. Enough to bring the driver’s seat back to center, and his look at the height of that of other usersfor a better coexistence. 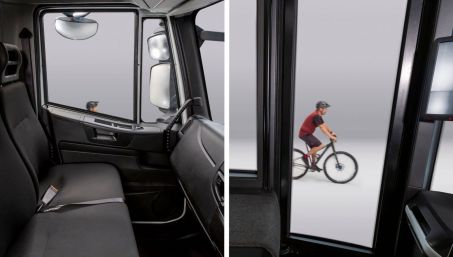 “We didn’t just want to produce a zero-emission truck to help fight the greenhouse effect — a global issue — or reduce particulate, nitrogen oxide and noise emissions — two local issues,” pleads Carl-Magnus Norden came to the Autodrome de Linas-Montlhéry, south-west of Paris, to give the press a try-out of his trucks which have reached an advanced stage of development. “Our approach is broader: it takes into account the increase in the number of cyclists and their difficult cohabitation with truck drivers who do not see them.”

His solution? Install the driver as low as in a bus and surround him with three large liquid crystal screens, broadcasting the images of nine cameras pointed so as to eradicate any blind spot in a properly exceptional field of vision.

Volta Trucks seeks to promote the profession of delivery driver

Companies are increasingly incentivized to prefer the safest trucks. On a European scale, nearly 78% of accidents that cost the life of a cyclist involve a truck. This is why, in France, trucks over 3.5 tonnes must display since January 1, 2021 placards materializing the position of blind spots (new article R.313-32-1 of the Highway Code).

Read alsoWith its electric pickup, Ford cuts the grass under the foot of Tesla

But the European Union wants to go further. It could be inspired by London regulations which, since March 2021, have fined the operator of a 12-tonne truck 635 euros (and its driver another 150 euros) if its cab does not respond. minimum requirements for visibility and reduction of blind spots (Direct Vision Standard regulations). “It’s no coincidence that the Volta Zero truck gets the maximum rating of 5 stars,” says Carl-Magnus Norden with satisfaction.

Anxious to retain their drivers, carriers strive to reduce the arduousness of their job

Safety is not the only priority. The Volta Zero cabin is the only one to combine a low floor and a central driving position. “It’s good best for back and knees”, confirms a transporter who came from the Doubs to Montlhéry to take the measure of this truck which is out of the ordinary. “It’s not uncommon for a delivery driver to get in and out of his cabin several dozen times a day. After the age of 40, fatigue accumulates and work accidents become frequent.” 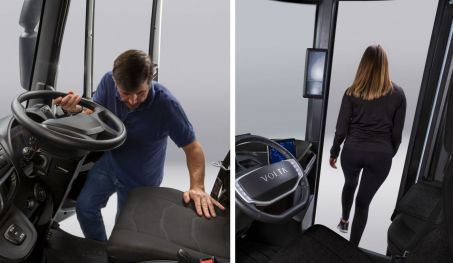 Carl-Magnus Norden’s hope is that older drivers (average age 56 in Germany, compared to 44 in France) will find in the cab of his truck a way to prolong their careers. “A happy driver is a loyal driver. It is important when the transportation industry is facing a shortage of drivers and a crisis in vocations,” recalls the entrepreneur. “Driving a Volta truck should be an asset for the recruiter at the same time as a source of pride for the employee. A young person will find it more rewarding for himself and for the community to drive a truck that respects the environment and is safer for him. other users.”

A truck that is not the enemy of the cyclist, that is good for the image of the carrier and its customers

These arguments have convinced transporters as prestigious as the German DB Schenker and the French Petit Forestier to pre-order 1,470 and 1,000 trucks respectively. Volta Zero sold for 265,000 euros each, or “twice to two and a half times the price of a diesel truck”. In all, the company announces 6,000 pre-orders, spread over approximately 70 customers. Carl-Magnus Norden is hopeful of winning over other companies as their leaders “settle the carrot behind the stick”.

Read alsoZFE-m: when ecology excludes cars for the poor

To hear it, keep the right to drive in low emission zones shouldn’t be the only reason to go electric: “Big brands will insist on associating their name with less dangerous trucks — not just less polluting and less energy-intensive.” And the entrepreneur confirms that the extraordinary look of the Volta Zero “constitutes an asset for companies wishing to take care of their image”.

Nevertheless, there is this legitimate question for the fleet manager: why bet on Volta Trucks and believe that a company devoid of any industrial experience will succeed where the most reputable manufacturers dare not venture? 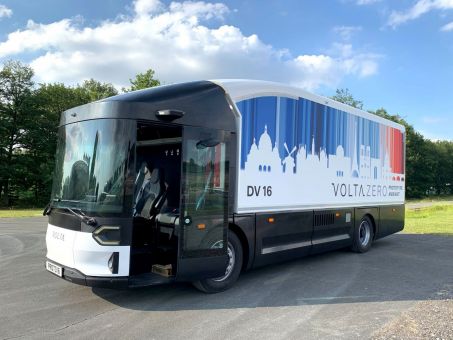 Carl-Magnus Norden’s answer can be summed up in one word: “agility”. His speech strangely resembles that of a certain Elon Musk, when Tesla still had everything to prove. “The capital of historical manufacturers is tied up in the production tool for internal combustion engines and gearboxes. The preservation of their margins depends largely on the pooling of many components that cannot be used for an electric truck”, analyzes the founder of Volta Trucks who has chosen to entrust the assembly of his trucks to a renowned equipment manufacturer, Steyr. Automotive in Austria, formerly MAN Truck & Bus Austria. LG Chem cell batteries supplied by American Proterra have been proven on thousands of buses since 2011, while the Volta Zero’s transmission and rear axle are designed by the highly regarded Meritor. Reassuring.

The newcomer also has the good sense to avoid any direct confrontation with the giants. Its compatriot Scania, for example, achieves only 10% to 15% of its sales in the category of trucks targeted by Volta Trucks (7.5 tonnes, 12 tonnes, 16 tonnes and – soon – 18 tonnes). Less than four years after the first studies, production of the Volta Zero truck should start in 2023, and reach 2,900 to 3,000 copies in the first year. “For a major manufacturer, such a project would have taken seven to eight years,” argues Carl-Magnus Norden.

Finally, the major manufacturers are facing the fears and reluctance of their networks of repairers, concerned about the reduction in labor requirements implied by the switch to electric (90% less moving parts). Volta Trucks does not have this difficulty to manage, starting from scratch. Methodical, the young company founded in 2019 will first establish itself in a few large urban centers in Paris, London, Madrid and Milan, as well as the Rhine-Ruhr region, in Germany, and the Randstad in the Netherlands. The first French “Volta Trucks Hub” opened its doors in the South-East of Paris, in Bonneuil-sur-Marne.

In addition to truck maintenance, long-term rental formulas and assistance in obtaining public aid, the so-called “Truck as a Service” offer allows companies to train their drivers in the subtleties of economical driving. And above all, to support fleet managers in analyzing their charging needs (power and number of terminals).

Given for a real range of 150 to 200 kilometres, the Volta Zero battery charges in 10 hours on a 22 kW terminal, or in 1 hour 45 minutes on a 250 kW fast terminal. “However, fast charging below 250 kW costs ten times more to install than charging below 150 kW,” warns Helder Ribeiro, Vice President Truck as a Service. Count 20,000 euros for a 50 kW charger (the terminal alone), against 1,000 euros for a 22 kW charger. “The choice of power to install therefore depends on the length of the truck’s break between two rounds.”