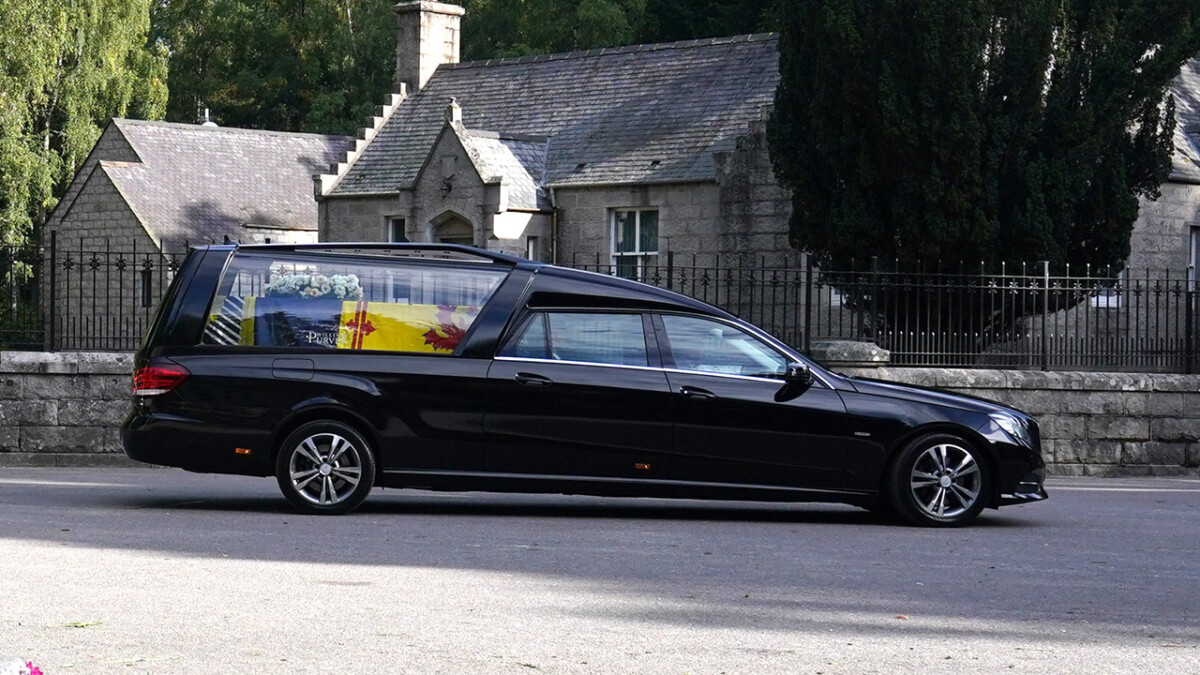 The recent funeral procession of Elizabeth II caused controversy, since the coffin of the Queen of England was transported by a Mercedes hearse…

Thursday, September 8, the Reine Elizabeth II died aged 96 at Balmoral Castle, Scotland. Before the funeral, which will take place on Monday, September 19, 2022, in London, the Queen’s coffin was transported a few days ago to Edinburgh, the capital of Scotland.

It was when leaving Balmoral Castle that the procession created controversy across the Channel: indeed, it was a Mercedes-Benz hearse which transports Queen Elizabeth II for one of her last journeys! Internet users are numerous to react to this subject, regretting that the vehicle is not a British production, like a Rolls-Royce, a Bentley, a Jaguar, a Land Rover, or even an Aston Martin.

Her Majesty The Queen’s coffin is taken in Procession to St Giles’ Cathedral.

Draped with the Royal Standard in Scotland, the coffin was flanked by the Bearer Party from the Royal Regiment of Scotland, and escorted by The King’s Body Guard for Scotland and The Queen’s children. pic.twitter.com/GSqcifVGWP

The royal vehicle was indeed a recent Mercedes E-Class, modified to transform it into a hearse 6 meters long, more than 1.1 meters more than the original station wagon. This extended wheelbase allows it to keep its four doors to carry passengers in the back, and the vehicle peaks at 1.92 meters in height, 44.6 cm more than the original model.

In Scotland, it would seem that a hearse based on an English brand vehicle, and meeting the specifications of the Royal family, was not available. The company responsible for transporting the Queen of England then chose a hearse with bodywork by a specialist, and based on a Mercedes E-Class Type 213.

Queen Elizabeth II passed away on Thursday September 8, 2022 at the age of 96. If the messages are pouring in from all sides, here are the tributes from the automotive world to Her Majesty. https://t.co/o6HTjH7ZjA

Hearse of Elizabeth II: a Mercedes converted by Binz

The vehicle was designed and fitted out by Binz, a coachbuilder founded in 1936 in Lorch, near Stuttgart in Germany and specialized in ambulances, hearses and limousines. From the 1950s, Binz worked with Mercedes, and fitted many of the brand’s vehicles for funeral and medical use.

Today, Binz is a reference of its kind and has even diversified with a 100% electric hearse, based on a Tesla Model S! The hearse used for Queen Elizabeth II is the Binz.H4which is based on the E-Class. A two-door version, dubbed Binz.H2, is also offered in the catalog of the German coachbuilder.

Read also :
• And if you bought a Mercedes-Benz dragster, limousine version?
• VIDEO – He rebuilds the Mercedes Vision AVTR concept… in wood!
• Mercedes motorhomes at the Düsseldorf Motor Show 2022

Following this controversy which created a real scandal across the Channel, the coffin of Elizabeth II was transported this Tuesday, September 13 to London by a Royal Air Force plane: on arrival, it was a corbillard Jaguar XF « Widebody » who took over, proof that it is still possible to find an English funeral vehicle for the Royal Family…

This English sedan was transformed by Wilcox Limousines, a British company which was also behind the production of the Jaguar XJ hearse which transported the Queen Mother in 2002. The model is 6.32 meters long, and was originally painted in gray: for the occasion, it was covered with a black covering, to comply with royal protocol.

Her Majesty The Queen’s coffin has left Balmoral.

Accompanied by The Princess Royal and Sir Tim Laurence, the cortege will travel to the Palace of Holyroodhouse.

The Wreath on the coffin features Dhalias, Sweet Peas, Phlox, White Heather and Pine Fir from the Balmoral Estate. pic.twitter.com/Atv2v9SGFz