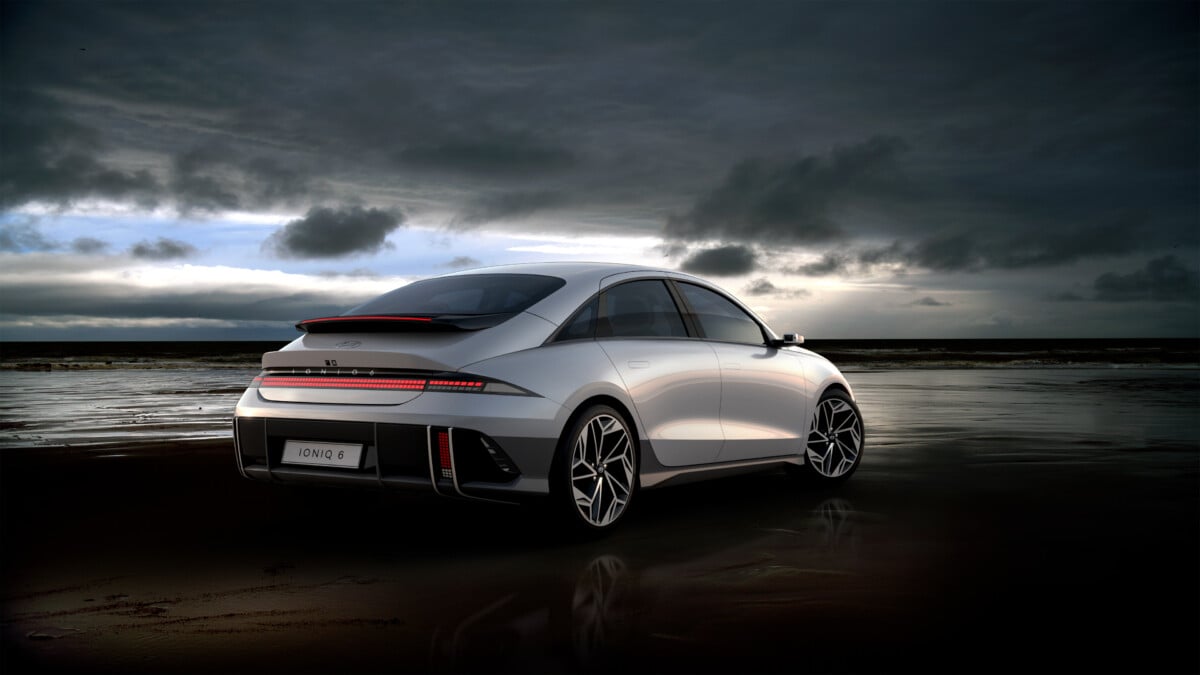 If Hyundai’s first electric model, the Ioniq 5, has found its audience, its new Ioniq 6 should do the same! Climb aboard this brand new zero emission model on video.

After a successful first electric model, Hyundai returns today with a new vehicle. Code name : Ioniq 6. If the Ioniq 5, car of the year, plays the SUV, this new Ioniq 6 sports a totally different style! And the least we can say is that she does not at all resemble to his predecessor.

A year under the sign of the electric: IONIQ 5 is among the finalists of the competition @caroftheyear. ⚡️🏆 pic.twitter.com/TmrCiSvShg

The first thing you notice is the length of the vehicle. Based on the E-GMP platform developed by Hyundai Motor Groupthe interior of Ioniq 6 was stretched front and rear to increase the living space in the car.

wheelbase (distance between front and rear wheels) measurement 2.95 meters, and the floor is completely flat. As a result, the model is longer than the Ioniq 5 and approaches 5 meters in length. Apart from the height, the Ioniq 6 is impressive! However, the dimensions may vary depending on the country and region of the world. Specifically, this Ioniq 6 measures 4.855 meters long, 1.88 meters wide and 1.495 meters high.

To get to know each other better, why not come on board? The Auto Plus team takes you there on video:

The cockpit of the new Ioniq 6 borrows elements from that of the Ioniq 5. It is equipped in particular with the 12-inch screen and instrument cluster, already present at the big sister. The central console has been lengthened and now comes fit into the dashboard. On the ends of the latter, two small wings are lined with interactive pixel lighting. The famous four points on the steering wheel are also bright.

Another point to highlight, the cockpit of the Ioniq 6 is made – in part – with sustainable materials.

A simplified and svelte design for the Ioniq 6

The Ioniq 6 represents the new design typology for the brand’s electric vehicles: « l’Electrified Streamliner ». Greatly inspired by the Prophecy concept car imagined by Hyundai in 2020, the aerodynamic profile and the curved lines are almost identical. First sketches had already been unveiled by Hyundai.

# IONIQ6 ⏳
Inspired by the streamline movement, the future 100% electric sedan from Hyundai is fast approaching! In the meantime, here’s something to keep you going. 😉 pic.twitter.com/q2iNojtYaY

On the front, the Ioniq 6 is equipped a new “H” logo and Pixel Matrix LED projectors. They are a bit more streamlined than on the Prophecy concept car.

On the rear side, we find the strip of pixels already present on the Ioniq 5, but located a little higher on Hyundai’s first electric model. Its light signature is also accentuated on its shield, with two vertical strips of pixels. The Ioniq 6 is also equipped a rear fin and a fin-shaped antenna.

The exterior mirrors are digital (optional) and flush door handles are automatic.

With its new Ioniq 6, Hyundai offers 3 new colors for a total of 12 colors available:

The pigmented paints applied to the exterior elements of the vehicle come of recycled materials. That of the exterior moldings is made from used tires while that which covers the bodywork is produced from bamboo charcoal.

18 or 20 inch rims will accompany the final look of the vehicle.

For now, Hyundai has not officially communicated the performance of its vehicle, or even its price. One can nevertheless expect a staggered power of 170 to 306 ch. The battery capacities should be the same as those of the Ioniq 5. Namely between 58 and 73, or even 77 kWh, since it shares the same platform.

The Hyundai Ioniq 6 should arrive on the French car market by the end of the year.