The Arlesian from Ferrari finally arrives. The Purosangue offers a look between raised station wagon and SUV, all with performance worthy of a Ferrari thanks to an atmospheric V12 of 725 hp!

Announced for several years, it makes some customers salivate, while purists cry foul. It’s a fact: there will be an SUV in the Ferrari range. Well almost… During the presentation to the press of the Purosangue, at the heart of its site in Maranello (Italy), the Prancing Horse made it a point of honor to specify that this model is not an SUV. Benedetto Vigna, the brand’s new boss, says he is “opening up a new segment” and that “this car is unlike any other”. However, looking at it, we find a bit of the tunes of FF or GTC4 Lusso raised, while the front and rear are reminiscent of a Roma.

The line is close to a station wagon, with a long hood and a sloping tailgate. The aerodynamics are very elaborate, with flanks hollowed out on the fenders or the hood, and a suspended rear spoiler. However, the Purosangue (for thoroughbred in Italian) likes to confuse the issue. Its contrasting wheel arches and sills (black paint or carbon fibre) reinforce the SUV look. The size is imposing, with 4.97 m long for 2.03 m wide, and especially 1.59 m high. As for the weight, the beast displays 2180 kg fully fueled. The new rims are fitted with 255/35 R22 tires at the front and 315/30 R23 at the rear!

4 doors and 4 seats, a first for Ferrari

In terms of style, the surprise comes from the rear doors. The Purosangue is the very first four-door Ferrari marketed in 75 years. The openings are antagonistic, with a 79° electric opening system for the rear. Enough to offer a nice feeling of space, even if the central upright is retained. The passenger compartment has four real seats, with large leather or Alcantara seats. As for the trunk, it is giant for a Ferrari with 473 liters. 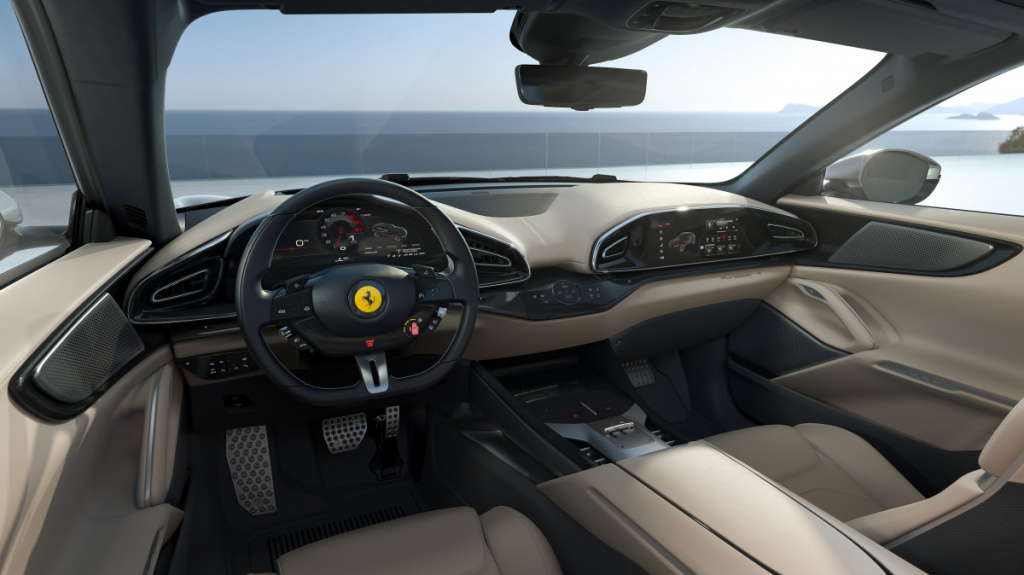 On board, the Ferrari Purosangue has no central screen or integrated navigation. The display is via two screens facing the passengers. That of the driver logically displays the counters, as well as the duplication of the smartphone thanks to Android Auto or Apple CarPlay. The second, facing the passenger, is used for the multimedia system. The double-hatted dashboard incorporates a few physical controls including air conditioning. Nice wink: the gearbox control takes up the design of the H-shaped grid of the old Ferraris with manual gearbox.

A V12 atmosphere under the hood

Under the reverse-opening hood, Ferrari engineers decided to place an atmospheric V12 without any hybridization. An assumed choice that contrasts with its recent models equipped with hybridization. It is not excluded that the range extends thereafter, but the V12 6.5 with dry sump is for the moment the single choice. This, associated with a New eight-speed dual-clutch automatic gearbox, develops a whopping 725 hp. The power is fully exploited at 7,750 rpm, and the red zone climbs up to 8,250 rpm. 80% of the maximum torque is already available from 2,100 rpm, to peak at 716 Nm at 6,250 rpm. The 0 to 100 km / h is shot in just 3.3 s, and the 0 to 200 km / h in 10.6 s. The top speed is displayed at more than 310 km/h.

To transmit all the power of the engine (in the central front position) and the gearbox (at the rear), the Purosangue incorporates the PTU (for Power Transfer Unit) inaugurated by the FF in 2011. It advantageously replaces the usual 4×4 system and its heavy differentials, which allows an ideal weight distribution of 49/51. The Italian manufacturer thus promises a dynamism worthy of its other sports cars. The unique chassis combines aluminum and carbon fiber, while an unprecedented active suspension adjusting on 10 mm is integrated. The four-wheel drive is therefore integrated as standard, but not for pure crossing since “it’s not a Jeep!” as Gianmaria Fulgenzi, Ferrari product development director, puts it. Finally, a system of rear steering wheels is required as on the F12 and GTC4Lusso.

But to taste it, you will have to be lucky! Ferrari does not wish to “use this model to make volume” (take that, Lamborghini Manage !) and wants to keep a certain exclusivity by making only a few copies. No official figures have been given, but pre-orders are already complete. The price of €390,000 (excluding options) does not seem to have dampened the fervor of Ferrari enthusiasts. The first units will be delivered in the second quarter of 2023.