The shortage of semiconductors leads to a net loss of 100 billion euros for the European automotive industry. Despite improved production, the threat to supply chains remains significant, according to Allianz Trade.

The shortage of semiconductors could cost the automotive sector a total of nearly 100 billion euros over 2021 and 2022.

According to Allianz Trade, a specialist in credit insurance, the shortage of semiconductors could cost the automotive sector a total of nearly 100 billion euros over 2021 and 2022. The first victim of this crisis, the automobile thus shows a production deficit nearly 18 million vehicles worldwide.

But it is in Europe that the situation is most tense: vehicle production has fallen to an unprecedented level of 13 million vehicles in 2021. Allianz Trade estimates that more than 50 billion euros have already been lost in 2021 , equivalent to 0.4% of the region’s GDP. Another 47 billion should be for 2022.”Germany is the most affected country (47.5 billion euros of loss of added value in 2021 and 2022), because its automotive sector represents a larger share of the overall added value“, says the study.

“Although the underlying reasons for the decline in automotive production globally are common to all regions, we observe a significant dispersion in performance“, adds Allianz Trade. Comparing the resilience of car registrations with regional semiconductor manufacturing capacities, we observe a positive and strong correlation, which underlines the importance of local chip production for resilience. of automotive production.

Despite improved production, the threat to supply chains remains significant. Electrical component requirements are growing, whether for connectivity, the safety of autonomous vehicles or the electrification of ranges.

Thus, the value of semiconductors in vehicles more than doubled to nearly $600. 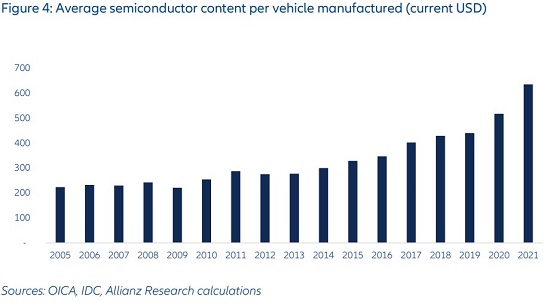 In this context, the credit insurance specialist believes that European support should focus on immediate and reasonable objectives. “The autonomy of semiconductors is far from within Europe’s reach. But policy makers can provide targeted support“, says the study.

According to Allianz Trade, support should focus on segments where Europe is both a large manufacturer and a large end market, ie automotive and not consumer electronics. Therefore, there is little point in attracting super advanced smelters. However, natural and economically viable incentives are needed to help grow the manufacturing footprint for industrial and automotive grade semiconductors.

Europe is home to three of the world’s largest automotive/industrial semiconductor companies, which have a mix of outsourced production (in Asia) and in-house, industrial-grade production. Policy makers need to tip the scales in the right direction for local investment to be more valuable than outsourcing to Asia.

Finally, current plans to expand semiconductor production in Europe will not help solve the continent’s problem, but the launch of joint ventures is a step in the right direction.